When is Clean Water Not Good?

I’m sure the question comes up often between residents, “How are improvement projects selected by the Village of Bradford”?    With limited funds and a long list of problems, decisions unfortunately are based not necessarily on public support.   They are instead, guided by state guidelines, Ohio Environmental Protection Agency (OEPA) requirements and also by emergency factors.

This critical demand method of selection is evident when reviewing the list of recent completed Village projects.   New sewer mains, storm mains, water mains, water tower, sewer treatment plant, and let’s not forget the recent construction of the new water treatment plant.      All of these projects were placed as high priority not necessarily by popularity but by countless anxieties.    The list continues to evolve and this brings me to my point, “When is Clean Water not Good”?

The irony is the Village has spent bundles of money to clean water and equally as much to eliminate it.    Let me explain, the Village of Bradford’s original sewer system was constructed in the early 1950’s and was designed to support both sanitary flows and also “Clean Water” flows (Combined Sewers).    Sanitary discharge flow  (wastewater) is defined as the flow of water from a house or business containing pollutants.    These flows most generally derive from toilets, sinks and washers but can also come from businesses in the form of discharge water from commercial/industrial processes.    Clean water is defined as water that may be collected at a home or business containing no pollutants.   Typically, these types of flow are from sump pumps, outside yard drains, down spouts and even basement drains.

Approximately 20 years ago the Village was mandated by the OEPA to discontinue operating the combined sewers and required the Village to separate the sanitary and clean water flows.    However, it was not as simple as one might think and significant advances to eliminate then did not occur until after 2010.   The biggest issue the Village faced was how to eliminate the Combined Sewer Overflows (CSO’s) as this was determined an urgent demand by the OEPA.  CSO’s were structures that were placed in the original system that allowed for high flows in wet weather events to discharge directly to Ballinger Run.  These weir type devices were extremely important as they prevented the sewer plant from becoming overloaded, which unfortunately also washed away bacteria required for treatment.  They also prevented the collection system from overloading, which in extreme cases, could flood basements, such flooding could cause property damage and allow sewerage to escape from manholes onto roadways creating health issues.
(Click Here for Video of Bacteria Discharge From Plant)

The Village had 10 CSO’s, which were all located along Ballinger Run.  By eliminating them, we knew from that point forward, all flows that entered the sanitary sewer would need to be addressed, no matter how large the flow would be.   We would no longer have the safe guard and protection of those CSO’s and furthermore we had no way to calculate just how large of an impact the removal would have to the treatment and collection systems.   Trying to minimize the amount of clean water that entered the sanitary system was given much consideration and required a large investment.   When possible, we constructed new sewers and used the existing line as a storm line.  We eliminated flow from all catch basins that entered the sanitary lines and relocated that flow into new storm lines.  We also increased the size of the New Wastewater Treatment plant to the maximum allowed size.

Once the CSO’s were removed, it didn’t take long to realize the magnitude of our issues.   Prior to the removal of the CSO’s, we recorded average discharge flows of 300,000 gallons per day from the wastewater plant and after, the discharge flow increased significantly.   The flow was now averaging 500,000 gallons per day.  What was even more alarming were the spikes during rain events often measuring at over 1 million gallons per day occasionally lasting over 10 days.    With these elevated flows, the plant struggled to operate properly and as a result, The Village of Bradford was placed on the EPA’s Significant Non- Complaint list.   This is a major violation and if not corrected, the Village would be facing severe penalties.

Even after major investment and commitment, our problems still exist but improvements are recognized.    For example, last year the Village leaders agreed to reconstruct and fix the sewer issues in the Southwest quadrant of town.   These repairs have made a significant impact on the discharge flows from the wastewater treatment facility.   It’s too soon to accurately measure the impact but we are extremely optimistic.   However, even with positive signs, we are still a long way from achieving the standard set by the EPA.

The Village has spent the past several years working with the EPA to resolve the issues with the Inflow and Infiltration.  Nevertheless, within the last 5 years the EPA took a massive stance for compliance.   Several correspondences and meetings were conducted with the EPA in attempt resolve the conflict.  The Village’s defense was based mostly around the finical demands required to correct the issue quickly.   The cost was too significant so a request for additional time was presented.  As a settlement, the EPA agreed to extend the time with detailed requirements listed in our National Pollutant Discharge Elimination System Permit (NPDES).   The requirements are time sensitive and strictly enforced.  If the Village fails to satisfy the demands listed, further restrictions could be placed on the Village.   One option suggested by the EPA was to force the construction of an equalization basin, which would store excess flow during rain events, then slowly drain into the treatment plant once the flow decreased.  This should only be considered as a last resort because of the high cost of constructing the basin.

As you can see, the Village has taken numerous steps to correct the issues.  Most of the corrections have been made to the public infrastructures, mains, treatment plant and streets.   As we continue to plan future projects, we must place emphasis on the private collection system.    A private collection system is the system that is located on each private property.  These systems include sewer laterals that connect to the sewer mains, and any other connection to a storm line.   As previously discussed, the sewer lateral from a private resident can only discharge sanitary flows.   Any “clean water”, sump pumps, down spouts, yard drains and basement drains can not be connected to the sanitary lateral.  This is defined in an ordnance passed by Village Council in 2004 after a mandate was issued by the EPA.  Clean Water Rule

Council has started the discussion on how to address the private connections as they believe it is one of the major factors involved in the elevated treatment flows.   The following are areas of concern, broken laterals, illegal connection of sump pumps, basement drains, yard drains and downspouts.   Here is an example, in one wet weather event, a sump pump can pump on an average of 60 gallons per minute and if connected into the sanitary sewer, that house would increase the flow to the treatment plant by almost 4,000 per hour.  Even If only 25% of the sump pumps are connected improperly, the flow to the wastewater plant could be increased by over 200,000 gallons per hour.

During Councils discussions it was agreed by all that the first step to correct the private collection system issues should be a process of public education.  This document will serve as the beginning of that process and my hope is to add additional information to this web-page throughout the month of May.

The next step will be to determine the magnitude of the issues by conducting inspections of all properties.   These inspections will consist of smoke testing the sewer mains to identify broken laterals, downspouts connected to sanitary lines and also to help locate illegal yard drains.  We will also be conducting in-house inspections that will concentrate mostly on sump pump connections; however, we will also review the entire private collection system while performing the inspection.    It is our hope that the inspections will start sometime this summer, but that is depended on if restrictions are still in place due to the Corona Virus.

Please take the time over the next few weeks and familiarize yourself with your home collection system and most importantly, the sump pump and where the discharge goes.   If you have any questions please do not hesitate to call 937-448-2718 Ext. 3. 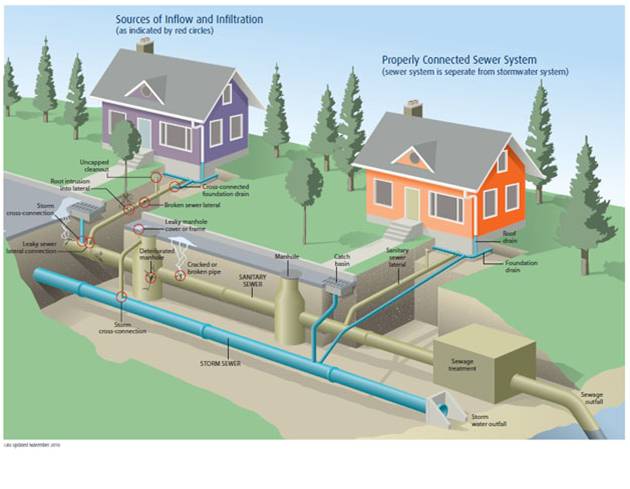 The Village of Bradford is now conducting meetings virtually in order to expand communication to those who are not physically able to attend and also help minimize the possible spread of COVID-19. MEETING … END_OF_DOCUMENT_TOKEN_TO_BE_REPLACED

**NIGHT DROP BOX:   The new drop box is now located on the North side of the building between the Train Stop and City Building.   Please use to remain safe during this COVID-19 phase.

Starting the week of March 8,2021, the Village will begin the process of replacing all water meters with new radio read meters.  These meters will provide the Village the ability to read more frequently and to help isolate leaks to prevent large usage bills.

The Village was able to secure funding through the Federal Government Cares Act to purchase the meters.  This came at a good time as our current meters are beginning to age beyond the manufacture’s life span.

Shed Requirements:
(CLICK HERE) Before placing a shed on your property.   If you have any questions about sheds please call the Administrator at 937-417-9936.

Fence Requirements:
(CLICK HERE) to get a copy of the Fence Ordinance.  If you have questions about the construction of a fence please call the Administrator at 937-417-9936

Village May Help will the Hauling of Gravel or Dirt
If you need gravel or dirt for your home improvement projects, the Village may be able to help transport it for you.  Please (CLICK HERE) to review the Ordinance on the hauling of dirt or gravel.  The material(s) must be purchased at CF Poeppelman Inc. by the resident before delivering.   Arrangements for the purchase can be made by calling 937-448-2191 and you can call 937-417-9953 to arrange the delivery.   Scheduled deliveries must be conducted during normal working hours and be made in advance.   No same day deliveries will be made.

How to make your plan a reality to build a fence, purchase a shed to store all those odds and ends … END_OF_DOCUMENT_TOKEN_TO_BE_REPLACED

Due to the Covid-19 virus, the Village of Bradford Council has extended the 2019 tax filing date … END_OF_DOCUMENT_TOKEN_TO_BE_REPLACED